The Journal du Japon takes you to the east of France, to Strasbourg, to introduce you to Asumi Kiyohara, chef of the “Yuki café restaurant”. Her credo: Enjoy discovering authentic Japanese cuisine. Notice to those who have traveled to Japan or would like to find out, dining at Yuki cafe restaurant is “being in Japan”! 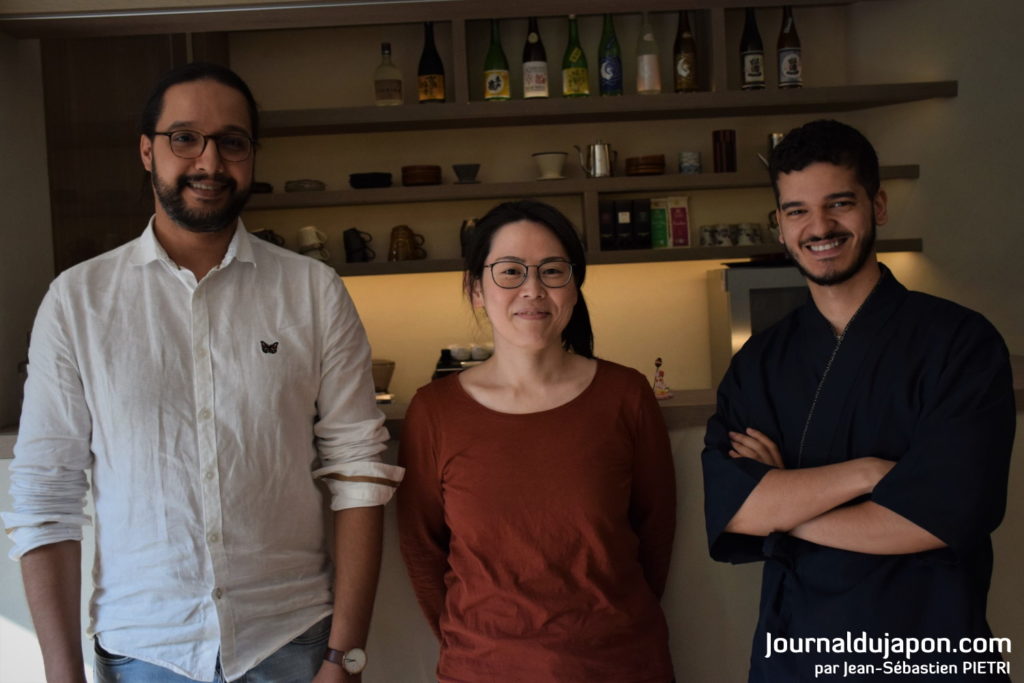 Strasbourg offers many dining options, especially Japanese cuisine. You can eat the inevitable sushi and popular dishes in France such as ramen (noodles in broth), tonkatsu (fried breaded pork), yakitoris (skewers), karaage (fried chicken) and takoyaki (octopus dumplings). . But for a few months, the chef Asumi Kiyohara opened on Yuki cafe restaurant and offers a Japanese cuisine that stands out from the usual offer of the Alsatian city. His bet: to share the taste of authentic local Japanese cuisine.
On an afternoon in April, an appointment was made at 4 boulevard de Nancy to interview the chef and his friend Youssef Katiri.

Journal du Japon: can you tell us your background?

Asumi Kiyohara : my name is Asumi Kiyohara, I am from Osaka. I studied in Japan to become a nutritionist. I immediately understood that to be a nutritionist you have to know how to cook. French cuisine is known in Japan, but it is not that of French daily life. I was interested in it because it differs from Japanese cuisine, it uses less salt.

After my studies, I wanted to go to France to learn French cuisine. First of all, I looked for a school to learn to speak French. Moving to Paris would have been interesting because there are many schools and a Japanese community, but the cost of accommodation and language schools was too high.

I especially liked Alsace because there was an affordable private language school and because the region is close to Germany. And even though it can get cold in winter, I decided to settle in Strasbourg in October 2006. 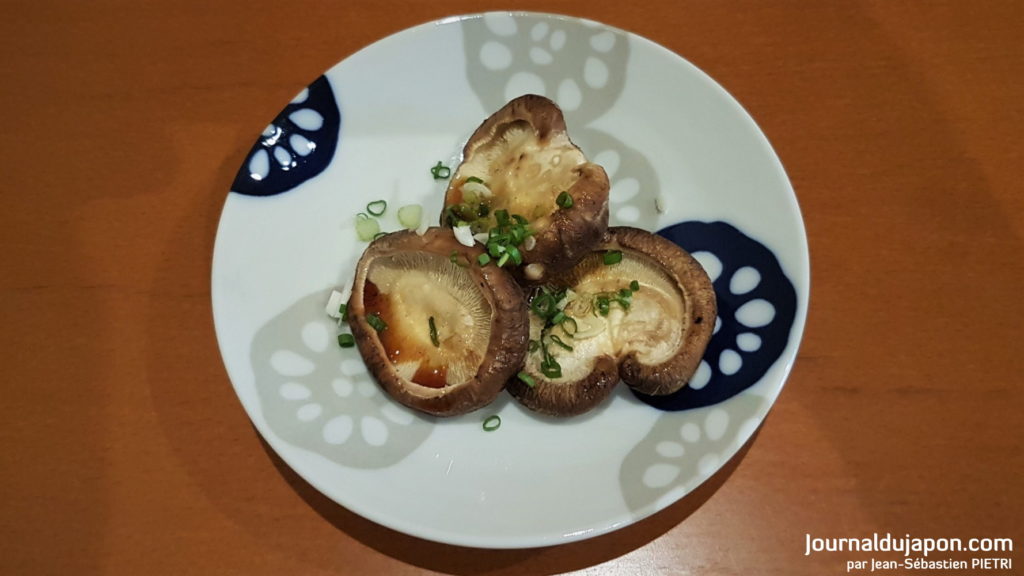 Did you then learn French cuisine?

Yes, I studied the French language for three years then I left for the Paris region for a year and a half to learn how to cook. Then I worked for a while in a French restaurant in southern Norway. I returned to Strasbourg because I had friends there and worked in the Japanese restaurant shoon. But my student residence visa no longer allowed me to work in France which is why I went back to Japan this time to apply for a merchant visa.

Upon my return, I wondered how important it was for a Japanese like me to cook in French, because I too don’t know the taste of French cuisine. On the other hand, I know Japanese cuisine well and thought I could show the French that Japanese cuisine is not just sushi and yakitori. So I chose to open a Japanese restaurant. 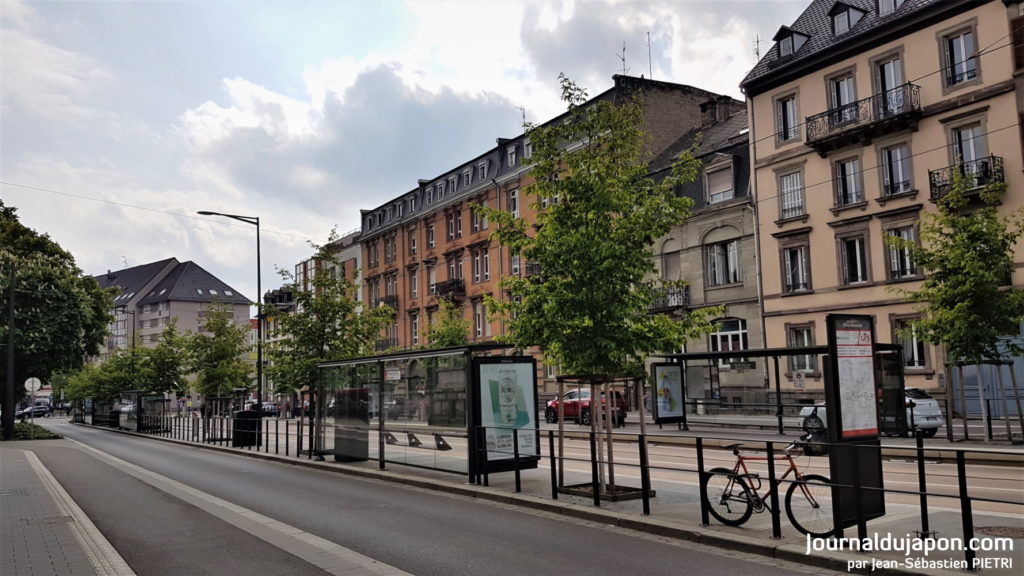 The Yuki café-restaurant is located at 4 boulevard de Nancy in Strasbourg, opposite this bus station. © Photo JS Pietri for Journal du Japon

You opened the restaurant at 4 boulevard de Nancy, on the outskirts of the center of Strasbourg. Is it a strategic choice?

The rent is interesting compared to the surface. I am fortunate to have a large kitchen to have the necessary equipment. It is a bit far from the center, but it is not important because I think that if my customers like my cuisine, they will come to this area.

Youssef Katiri: it is an economical choice at the beginning. The premises were taken before the development work on the Boulevard de Nancy and the arrival of the tramway. The neighborhood is changing and gentrification is taking place. Before, this place was a bakery and then a doner kebab. Instead of taking an expensive, smaller place in the city center that requires immediate results and pressure, Asumi preferred to have a better space / price ratio, take her time to cook for others, and develop her own cuisine. The choice of her today is quite profitable. 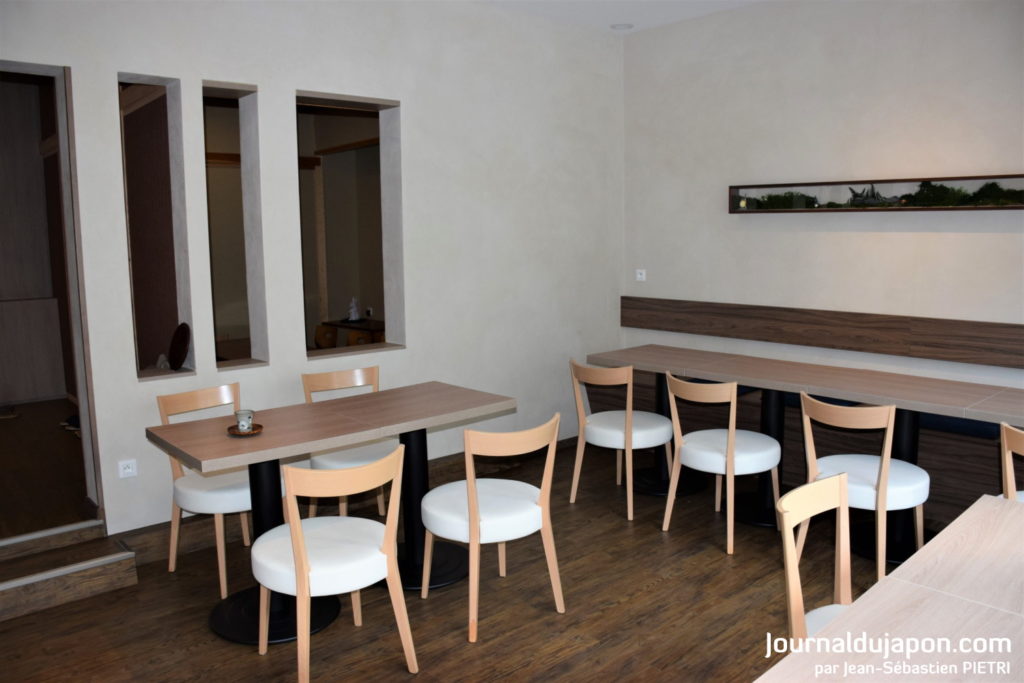 1st bedroom with a refined and modern style. The walls are covered with lime. © Photo JS Pietri for Journal du Japon

Can you explain the internal layout of the restaurant, because when we enter we have the feeling of being in Japan!

Youssef Katiri: it’s wanted (laughs). We know Japanese restaurants in Alsace or Germany and didn’t want to have a fake decoration. Emphasis is often given to Asian decorations to give the feeling of a change of scenery or exoticism. Here, those unfamiliar with Japan will not immediately have this feeling of being in Japan, but the refined and simple side of the materials used (in particular the lime made in Alsace) suggests this. We partnered with a local architectural firm to update the entire facility and ensure compliance with standards.

The tatami room is a bit special, it has been set up like a Japanese living room while allowing you not to stay crouched, because in Europe we are not used to sitting like this for a long time. The room was designed by a Japanese architect, the materials were imported directly from Japan and it was a local carpenter who made the arrangements. 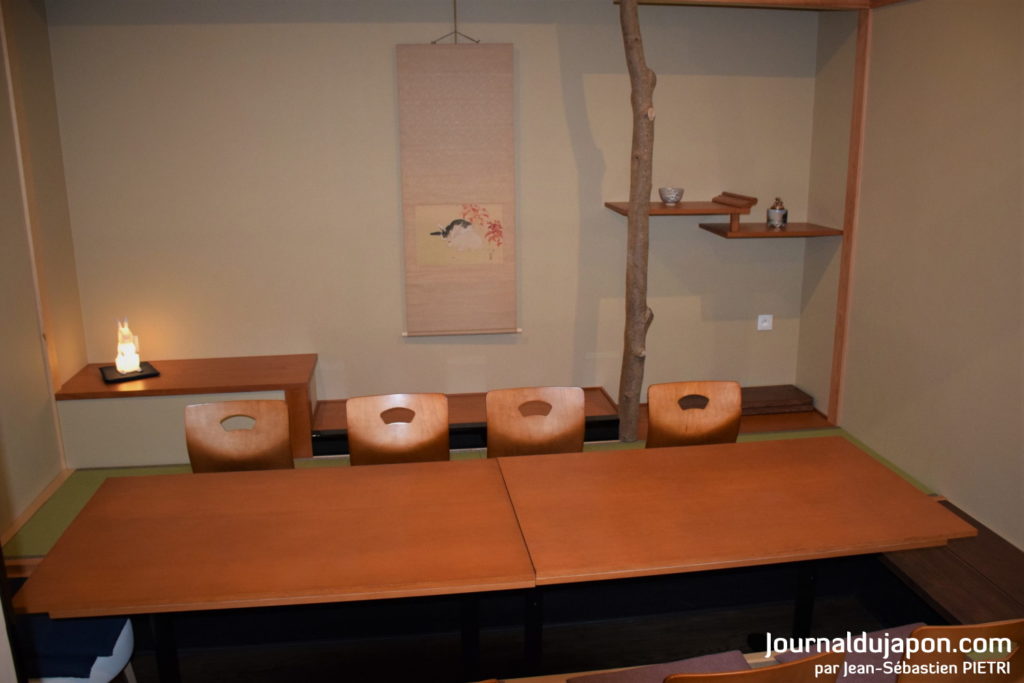 Have you chosen to have a “wabi” (short) and “sabi” (full) menu per week, knowing that you are only open on Thursday, Friday and Saturday nights?

Asumi Kiyohara: it’s a personal choice, because changing menus every week is complicated and so I need time to develop it. I wonder every time if the dish I’m thinking about will be loved by Strasbourg residents. The restoration takes a lot of work, from morning to evening. It is very hard work if we open lunch and dinner and I know that if I am stressed my work will be neglected.

I told myself that the main thing is to please myself and please my customers. I therefore limit the number of days the restaurant is open so that I can work properly and serve the best cuisine. 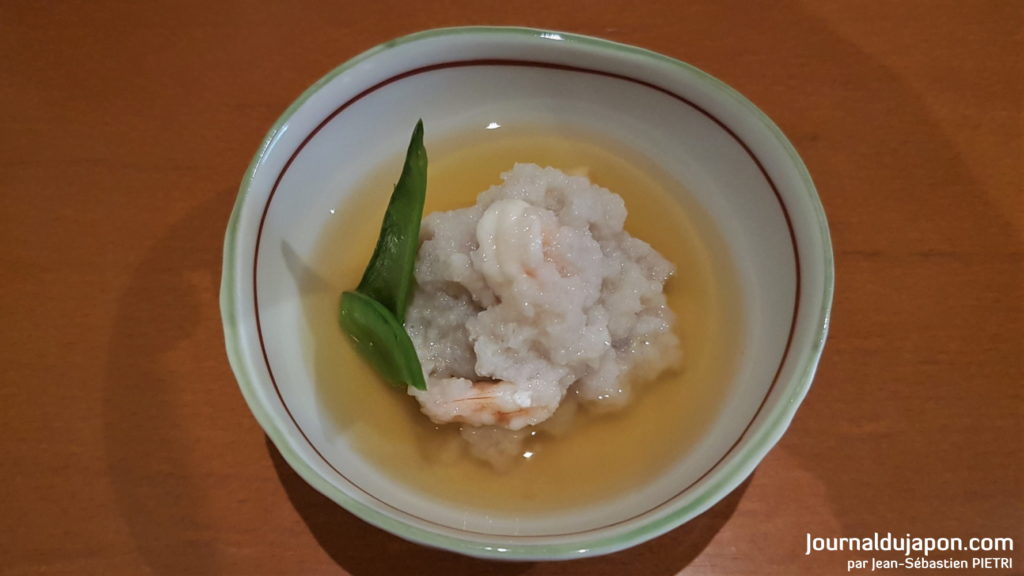 To prepare your dishes, do you receive supplies from France and Japan?

I buy Japanese products from a supplier in Germany, especially Japanese rice, and on the Internet. For fresh produce, I buy from local shops and even local producers. I also grow plants like yuzu (citrus) and shiso (see our article on shiso), for example. 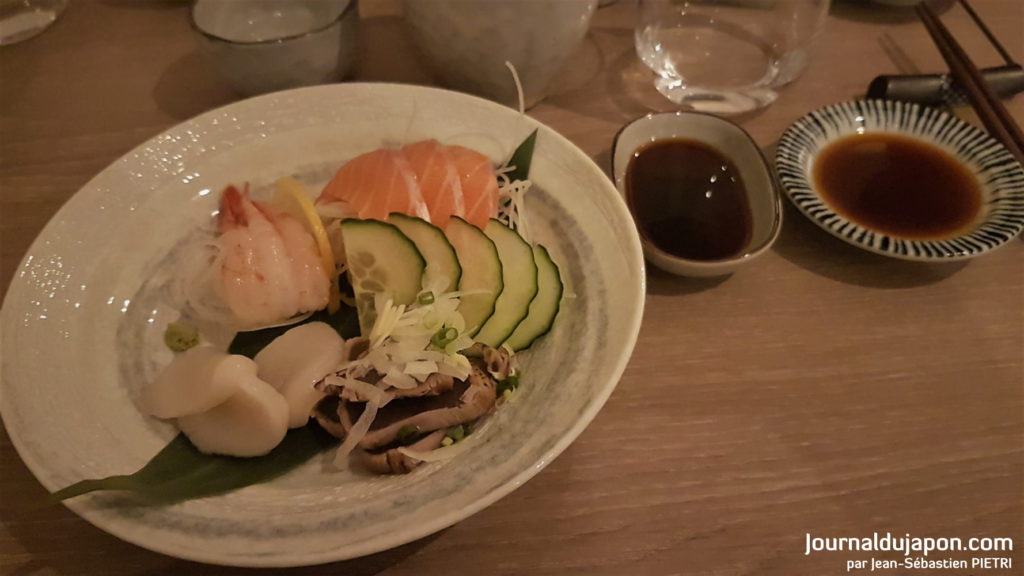 You cook Japanese dishes but also introduce French products to this kitchen.

In fact, if I import most of the products from Japan to make authentic Japanese cuisine, it’s not much good for the environment. So I try to buy locally and in season as soon as possible, for example the asparagus I cooked this week comes from Hoerdt (Bas-Rhin). 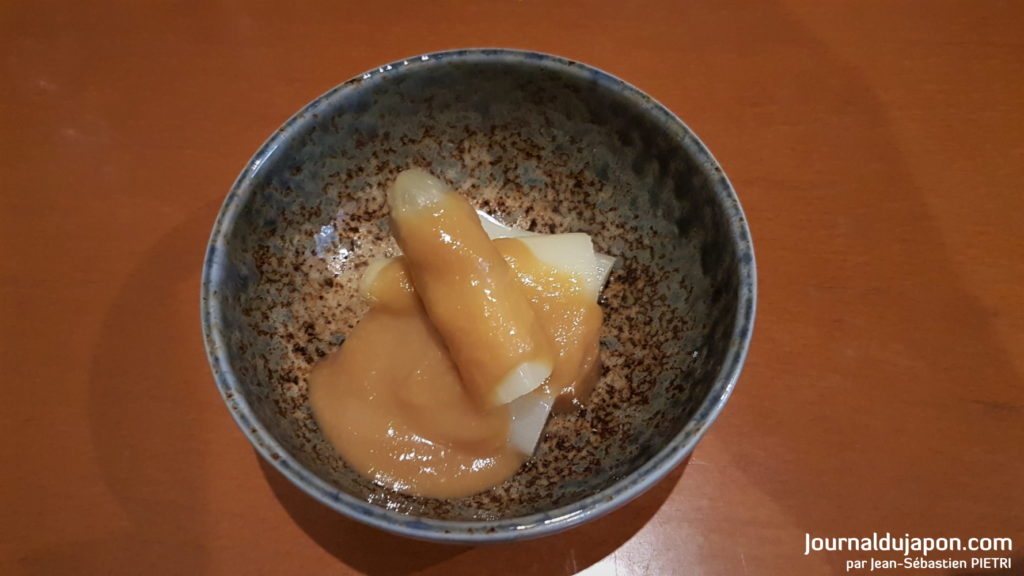 Offer a pretty extensive sake menu and even sparkling shiso!

Youssef Katiri: is a Japanese supplier that directly links sake producers in Japan with the restaurant. Most of the sake on offer is imported directly from Japan.

Asumi Kiyohara: I also offer a special “Gyotaku” wine produced by a Franco-Japanese couple of Alsatian winemakers that goes well with the Japanese taste of the dishes they serve. It goes particularly well with sushi. The company name is Lands of the starsin Ostheim near Colmar.

To conclude this interview, can you tell us what your future projects are?

I had planned to open the bar in April, as it is the “Yuki coffee restaurant”, but I didn’t have time. It would be a half traditional, half western “café” serving sweets and tea. I’m still taking the time to think about this project. 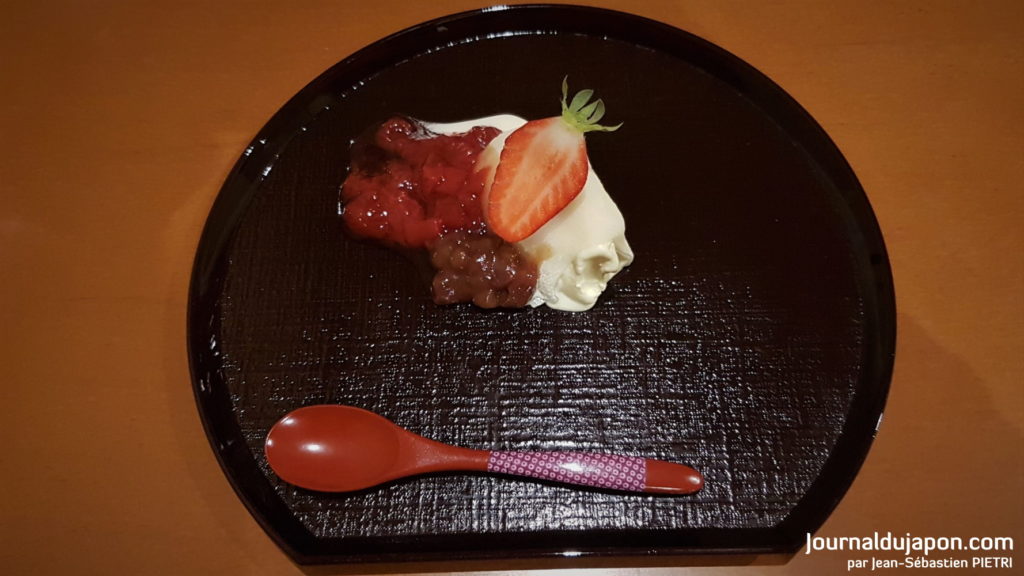 The Journal du Japon thanks chef Asumi Kiyohara for accepting this interview. To book go to the restaurant’s website and follow the social networks: