Founded in 1996, Solenca hotel-restaurant he was not yet birthday. It has been done since May 20, 2022. So it deserved a mention! The diary of Gers presents below a summary of the speech of the owner of the establishment, Gérard Ducès, who describes 26 years of life of the Solenca.

The 20th anniversary was in 2016, but Gérard Ducès broke his leg: it was decided to postpone the celebration to the 25th anniversary. As this falls in the midst of a health crisis in May 2021, it is therefore the 26th that is celebrated on May 20, 2022.

The evening is sumptuous: aperitif, imaginative and succulent homemade appetizers, hot dishes, wine, champagne, coffee, all accompanied by soft music by Yves Sanarens (Great escape (1). And with a mug as a gift for each guest.

The company struggles to exist

Before these agapes, Gérard Ducès describes the life of the Solenca during these 26 years. “By constantly being at the forefront of excellence and progress”. And it is also an opportunity for him to highlight Roxana Amiot, director of the establishment, whose role is gaining importance.

To be at the forefront in terms of technology and comfort, a gym and a sauna were set up in 1996, a website was created in 1999 – full of tourist information (2) – and a computer was made available to customers with printer and, then, wi-fi is offered free to customers. And, brand new, a double charging station for electric cars has just been installed.

But all this is not enough to fill the rooms, despite the presence of the racetrack. What to do to attract groups? Gérard Ducès created a sales position for potential clients of the group and, in 2000, a travel agency in Cenon (near Bordeaux), specializing in group marketing. He has created 15,000 group contacts, classified by areas of interest, which continue to attract customers.

These customers – local, regional, French and European – have spent around 1.5 million euros over 10 years a Solenca and local service providers with whom Solenca guides them, such as the Gascon Peasant Museum (in Toujouse), the Domaine de Juglaron (in Éauze), the Ramajo waterfowl farm (in Dému), the Artagnan Museum (in Lupiac), the Buros ganaderia (in Escalans – Landes), the cities of Auch and Condom etc., as well as several Gers restaurants.

Moreover, the Solenca demonstrates the quality of the service offered to customers thanks to the labels Master restaurateur, quality of tourism, tourism and handicap, quality of tourism Occitanie Sud de France. The establishment is also a member of the association Sustainable tourism actors (ATD). 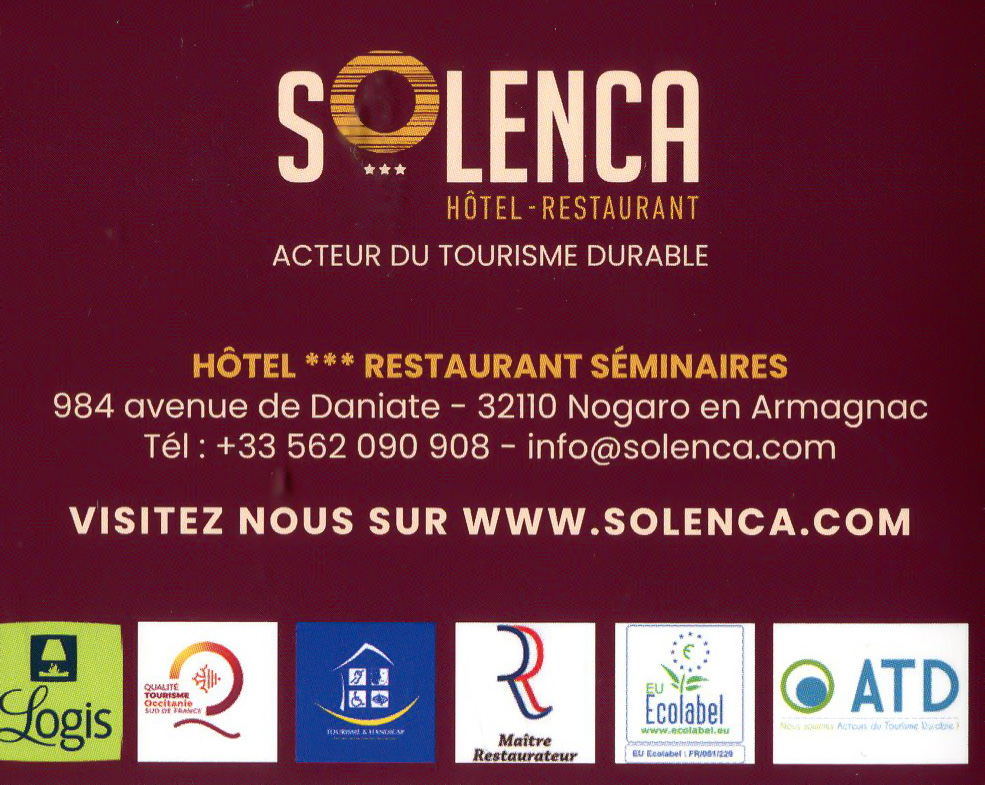 The new logo of Solenca

It should be noted that Gérard Ducès is very committed to the latter movement, whose members are committed to continuous progress. He commissioned Roxana Amiot, director of the institute, to move forward in this direction and to advertise the new logo of the Solenca.

The fights of Gérard Ducès

Gérad Ducès has told us on several occasions that he does not allow associations and villages to “compete unfairly” with professionals by organizing meals without having to pay the burdens on professionals.

According to him, it also happens – known case – that a public authority makes this type of competition.

More publicly, he has always opposed the collection of a tourist tax by the community of municipalities, especially if it is fixed, because it is valid even if the businesses have had very few customers.

Another manifestation of “unfair competition”: owners of bed and breakfasts offering more than 5 rooms, which is contrary to the regulation.

Finally, Gérard Ducès had not imagined dealing with the municipality of Nogaro: the latter had given the project manager land for a hotel-restaurant and seminars with 50 rooms. Against this plan, he argued that the hotels in the area were far from full and that this new offer would shut them all down.

Gérard Ducès, during this evening, appeared to us as usual: welcoming, perfectionist, determined, tenacious, determined and … adventurer!